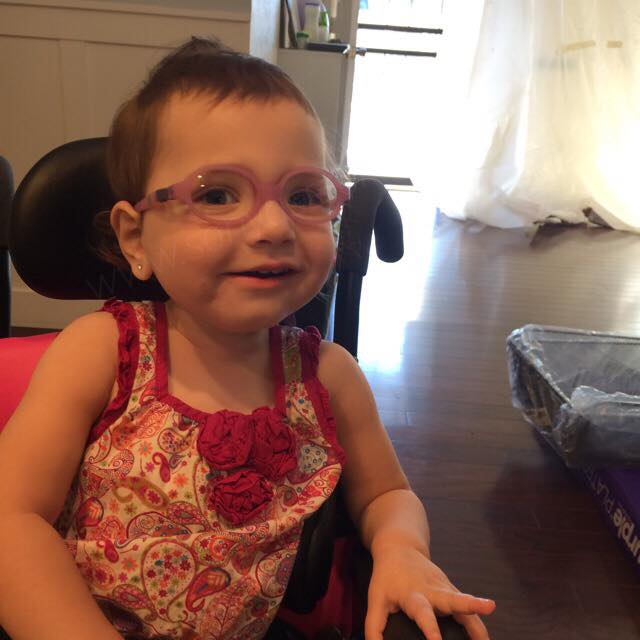 Randi’s blog, Sonya’s Story, is about her journey parenting daughter Sonya and sharing her journey with the rare genetic disorder, CDKL5. Sadly Sonya, or Sonzee as the family affectionately refers to her, died peacefully at home in February 2020.

An excerpt from Sonya’s Story:

When our daughter first had a seizure it was not like the movies. It was subtle, quick, and questionable. I honestly wonder how many times in her first days I missed, or how many I saw but attributed to something else. I often wonder if I felt them in-utero, or if her first one occured right after birth. In hindsight, the “wonky eye movement” we have learned are her trademark seizures. So many times these will be missed by those who are unfamiliar with her, to be honest, even those who know her extremely well can still miss these types. They happen when you turn your head to tie your shoe, when you blink, or when you rub your eyes. They are less than a second and look benign, but just as devastating to her brain as her other types because they tend to occur in clusters, seconds apart, and for lengthy periods of time. So many times when I point out a seizure to someone who has just met Sonzee the responses are always the same, “Oh wow, I never would have known that was seizure” and “How did you know that was a seizure?” The thing about seizures is that they are not always obvious and they are not what you might envision. READ MORE
Don’t miss her latest post!

According to the International Foundation for CDKL5 Research,CDKL5 deficiency disorder is a rare developmental epileptic encephalopathy caused by mutations in the CDKL5 gene, and this can manifest in a broad range of clinical symptoms and severity. The hallmarks are early-onset, intractable epilepsy and neurodevelopmental delay impacting cognitive, motor, speech, and visual function. Although rare, the occurrence is believed to be ~1:40,000 -75,000 live births, making it one of the most common forms of genetic epilepsy.

The CDKL5 gene provides instructions for making proteins that are essential for normal brain and neuron development. The CDKL5 protein acts as a kinase, which is an enzyme that changes the activity of other proteins by adding oxygen and phosphate atoms (a phosphate group) at specific positions. Researchers have not yet determined which proteins are targeted by the CDKL5 protein.
CDKL5 was first identified in 2004, it stands for cyclin-dependent kinase-like 5, and its location is on the X chromosome. The X chromosome is one of the sex chromosomes; females have two X’s, and males have one X and one Y chromosome. The letters are an abbreviation of the scientific name of the gene, which describes what it does. The CDKL5 gene was previously called STK9. Many cases have been identified in boys, but because of the location of the gene, CDD mainly affects girls.
This genetic mutation has been found in children diagnosed with Infantile Spasms, West Syndrome, Lennox-Gastaut, Rett Syndrome, cerebral palsy and autism. However, it is important to note that scientists and doctors do not know what causes CDKL5 mutations, or the full spectrum of CDKL5 disorders at this time. It is likely that there are many people affected by CDKL5 who have mild symptoms and no seizures. With continued research and awareness of CDKL5, we hope to build a more comprehensive understanding of the spectrum of this disorder, and begin the search for a desperately needed cure.