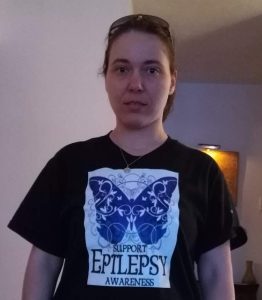 I have a type of epilepsy that was inherited from my mother’s mother. My grandmother was born with PCDH19 epilepsy. She was lucky enough to grow out of Epilepsy when she turned 21 years old.

What is PCDH19 Epilepsy?

According to the PCDH19 Alliance, PCDH19 Epilepsy is a condition with a wide spectrum of severity in seizures, cognitive delays and other symptoms, which are all caused by a mutation of the PCDH19 gene on the x chromosome. Males with the mutation, who will be largely unaffected, will pass the mutation onto 100% of their daughters and none of their sons. Women with the mutation have a 50% chance of passing it to their daughters and will pass it to 50% of their sons. Recently, scientists have discovered some unaffected females and are studying to learn what is protecting them from the disorder. Mosaic males are also affected, but so far very few males have been diagnosed.

The PCDH19 epilepsy gene skipped my mother and her siblings. When my brother was born he did not inherit Epilepsy but he carried the gene. However, when then my mother had me and my sister, we were both diagnosed with PCDH19 Epilepsy. Unfortunately my sister passed away at the age of 12 years old in her sleep.

My mother’s siblings also had kids, both boys and girls, but they did not inherit Epilepsy.

I hope you will take a moment to learn more about PCDH19 and help us raise awareness.

NEXT UP: Be sure to check out the next post by Dana at https://luvnlambertlife.com/.