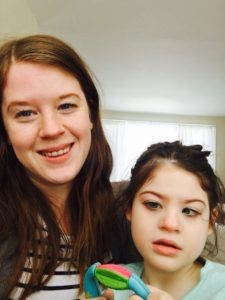 Colleen’s life began with so much uncertainty; none of her doctors knew what to expect and what she would be capable of. As she’s gotten older, we’ve had to overcome many issues, including communication and safety. But this is where technology has begun to play a key role.

Having both epilepsy and cerebral palsy, I thought her crib would work for her for a while. It was lowered to as far as it would go, and I thought that it was enough to keep her safe. One day, much to my surprise, she managed to get out of her crib and crawl to the landing at the top of the stairway. Thank goodness for some left-out Easter decorations, or I don’t want to know what could have happened. I knew at that point, Colleen needed a better option. We worked with her service coordinator and I began to search online for solutions. A lot of options were large and clunky. Or, they left me wondering just how long they would work for. I found and petitioned for the Safety Sleeper, also known as Abrams Bed. It’s an enclosed bed designed for special needs and has been an absolute life-saver. Colleen loves it and I can sleep well at night knowing she can’t fall out or get into anything unsafe. What makes the Safety Sleeper better for our needs is that it is portable. It came with it’s own suitcase and is very easy to assemble. So, when we make our annual trip to Boston Children’s or want to go on vacation (this actually hasn’t quite happened yet!) it can be brought with us!

Colleen, spent 20 days in the NICU. There was a lot of uncertainty, questions that couldn’t be fully answered. But I believed when they thought she would eventually grow out of it. The medications changed, but her EEG’s stayed the same. Throughout, I still hoped that maybe one day when we went in for that EEG, we’d finally be told that there was an improvement. She had two seizures in the NICU, and one in 2013. But there was a dramatic increase in visible seizures in 2015 (I say visible because her EEG showed seizure activity, but we couldn’t tell she was having anything, other than maybe a slight pause or some blinking). This is when I discovered the very real and very scary SUDEP. None of her doctors ever told me about the risk. I was always scared about Colleen having a seizure at night, but with her increase, I became very scared of this possibility. I remembered having seen a GoFundMe campaign for the Embrace epilepsy monitoring watch. What amazing technology! Something that could detect seizures and alert caregivers? I didn’t even know that was possible. But at that point in time, they weren’t ready. So I began to search for other options and found the SAMi camera. This gets mounted to a wall near their bed, and can detect seizure movements. This was the first step to being able to sleep better at night. I cannot say just how much better it makes you feel to know that your loved one, your child has a constant watch on them. Once the Embrace watch was released, Colleen received hers and we could not be happier. It has alerted up on a few occasions where we were able to get to Colleen and make sure she’s safe until the end of her seizure. This device is also invaluable.

Through all this, even with the close monitoring, you still want what is best for your child, no matter what. And as technology also advances, so does medical innovation. I clearly remember the words of Colleen’s neurologist. She has scar tissue on her right and left frontal lobe from her birth injury. “Once the neurons are damaged, they cannot regrow.” It was crushing, but I knew it was true. I just hoped that her brain, as little as she was, would be able to “remap” itself to avoid the damage. Still, instead of accepting that as it was, I researched “neuron regeneration” when we got home from the neurologist and found two research studies; one in the U.S and one in Europe. Maybe not now, but in the future, there could be hope!

But, what if there is hope today? As I was browsing Instagram one day, I found a post from one of the families I follow whose daughter also has cerebral palsy, and she talked about receiving stem cell therapy. I immediately began to research and even emailed the mother who had posted about the therapy. The doctor she brought her daughter to in California uses cord blood stem cells. Stem cells are thought to be able to travel to areas of the body where they are needed. They are able to bridge gaps and form new neurons. I was elated. We got in touch with the doctor and were able to raise enough money to take her. One of the things that struck me most about the doctor was when he was talking about stem cell therapy. He told me so many successes and stories of hope and miracles. The stem cells themselves are screened, as with the mom and baby, almost like if you were donating blood. They are 100% safe. I see the progress of the family on Instagram, and I had a co-worker come to me and tell me about their niece, who had had the therapy within a medical study.

The therapy session itself is very easy. We traveled from New York to California. Her appointment was at 9AM. Walking talking through everything with us, we gave Colleen a dose of her emergency med to help her relax. He also programed a Microcurrent machine, which was a surprise. When you get an EEG, electrodes are placed on your head, and they can essentially read the brain waves. Microcurrent is able to focus on those areas, almost as a way to direct the stem cells where to go. Colleen’s microcurrent program was directed to her right and left frontal lobe as well as her ears (she has bilateral hearing loss).

We are two months post-stem cells and so far, very happy with the results. Colleen is babbling a lot more. She’s making sounds that she never did prior. She’s experiencing far less stomach issues. She can incredibly close to needing a feeding tube as she was failure to thrive. After having to see her literally suffer for months and months, it’s amazing that she’s no longer uncomfortable and in pain. She’s more aware of her surroundings and has been more careful. She’s using her arms more and seems stronger. A week after stem cells, she went to see her neurologist. I was sad to find out there was really no change in her EEG, but that’s okay. When she’s gotten enough sleep, we’ve seen far less myoclonic jerks. After one treatment, I think it’s safe to say that this medical innovation is a life-changer and we plan on bringing Colleen back for additional treatment.

Epilepsy makes me feel out of control. In some sense, I have felt that no matter what we did, we just couldn’t help her in the way we would like. What has made me feel empowered is researching. The more knowledge I have, the more prepared I can be for the uncertainties. Technology has given me peace of mind, and I have no doubt that there are and can be better options in the future. Of course, as a mother, nothing would make me happier than for there to be a cure for epilepsy. This is where, I believe, medical innovation will come into play. And based on what we’ve been able to do so far, I have faith.

If you would like any more information about stem cell therapy, or any of the other things I have talked about, please feel free to email me at jennylouns@email.com

NEXT UP: For the full schedule of bloggers participating in the Epilepsy Blog Relay™ visit livingwellwithepilepsy.com.