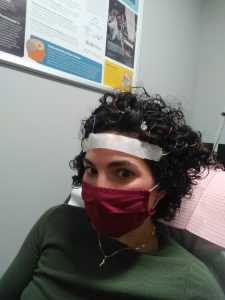 My name is Gina Moses, and I was born with temporal lobe epilepsy (TLE). As a child, the doctors put me on every medication (except Dilantin), but my seizures continued to worsen. By age nine, I was in status epilepticus almost every day for hours.

The doctors decided to do surgery, and I was one of the first brain surgeries in 1999. They found a tumor pressing on the hypothalamus. The surgery significantly reduced my seizures. To this day, I still have focal seizures, especially when my hormones change.

What is Temporal Lobe Epilepsy

According to WebMD, there are 700,000 licensed drivers living with epilepsy. Each state has its own regulations, and they can vary greatly. You can visit the website of your state’s department of motor vehicles (DMV) to find out the requirements where you live. The Epilepsy Foundation also has a searchable database of state regulations on its website. However it is best to check this information against your state’s department of motor vehicles to ensure accuracy. Also, many other countries have varied rules and regulations with regard to driving while living with epilepsy.

Thriving as an adult

Now I’m on three medications: Banzel, Lyrica, and Onfi. They are the only medications I can take without side effects. I am able to drive, work as an admin in construction, and soon will have a commitment ceremony with my partner.