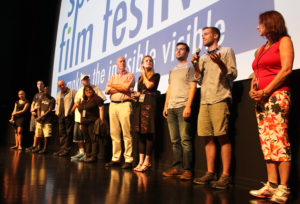 We all know Netflix, but are you familiar with Sproutflix?  This website provides “the largest and most diverse assortment of films featuring people with intellectual and developmental disabilities.”  The films below are part of a library of over 200 films.  These are used by agencies and schools to educate and create social change.

In one documentary, Awareness is a documentary about people with disabilities sharing their struggles as well as their hopes.  The Best Thing We Ever Done focus’ on two couples who share the stories of not only their challenges, but how they met.  The last addition is Winston’s Ghost: The Photography of Ryan Gustman.  Ryan Gustman is an artist who happens to have autism.  Gustman shares his path to capture his artful view on abandonment and natural decay.

Head over to the Sproutflix website to view these new films and more!  Check out the opportunities for the Sprout Touring Film Festival and how to submit your own films here.  Let us know what documentary touched your life in the comments below!

Leila shares stories on stigma and epilepsy based on her experiences and what she hears from others. She was diagnosed with Epilepsy at age 8 and is based in Pennsylvania.