Disclusure: This post is for informational purposes only. Living Well With Epilepsy did not receive any product samples or compensation in exchange for this post.

This new approved indication allows APTIOM to be used as monotherapy in people who initiate treatment for the first time or convert from other antiepileptic drugs (AEDs) to APTIOM. This approval comes on the heels of a position paper published by the American Academy of Neurology (AAN) on the treatment of epilepsy. Within the position paper, the AAN notes:

“The AAN supports the use of newer-generation anticonvulsant drugs in the treatment of epilepsy. Newer generation anticonvulsant drugs generally result in fewer and less-severe side-effects, although they may be more expensive to prescribe. For patients with epilepsy, the AAN does not believe that economic considerations alone should determine the prescribing pattern of physicians. The AAN believes that physicians should make every effort to identify when patients may be effectively treated with less expensive alternatives. However, the discretion for this decision should remain with the prescribing physician and should not be determined by coverage limitations.”

Hope for those living with Partial-onset Seizures

“We believe that APTIOM provides an additional therapeutic option to a larger group of people with partial-onset seizures, since APTIOM can now be used both as a monotherapy, as well as an adjunctive treatment,” said David Frawley, Senior Vice President and Chief Commercial Officer, Sunovion.

The company achieved FDA approval of a monotherapy indication for APTIOM, based on the results of two identically designed Phase 3 clinical studies (Studies 093-045 and 093-046) conducted by Sunovion. Data from the monotherapy trials, in addition to the data generated from the adjunctive trials, confirm that APTIOM is efficacious and well-tolerated as adjunctive or monotherapy treatment within a daily dose range of 800 to 1,600 milligrams.

Two identically designed Phase 3, dose-blinded, historical-controlled, multi-center, randomized clinical trials (Studies 093-045 and 093-046) evaluated the safety and efficacy of APTIOM (1,600 mg/day or 1,200 mg/day) as monotherapy for partial-onset seizures in patients 16 years of age or older whose seizures were not well-controlled with other antiepileptic drugs (AEDs).

The primary endpoint for both trials was the percentage of patients who exited the study due to pre-defined criteria identifying worsening seizure control, compared to historical controls from previous, similarly designed trials of epilepsy patients converting to AED monotherapy. Trial results showed that conversion to APTIOM monotherapy was associated with exit rates superior to historical controls in patients with partial-onset seizures, who were not well-controlled by one or two current AEDs.

APTIOM administered once-daily was generally well tolerated in both dose strengths. In the APTIOM monotherapy trials, the most common treatment-related adverse events, headache, dizziness, fatigue, somnolence, and nausea, were mainly mild or moderate in severity.

About Epilepsy and Partial-Onset Seizures

Epilepsy is the fourth most common neurological condition, and one in 26 people in the U.S. will develop epilepsy in their lifetime.1 Epilepsy manifests as unprovoked seizures, which are caused by abnormal firing of impulses from nerve cells in the brain.2 Partial-onset seizures, one type of seizure and the most common, are characterized by bursts of electrical activity that are initially focused in specific areas of the brain and may become more widespread, with symptoms varying according to the affected areas.3 The unpredictable nature of seizures can have a significant impact on those with epilepsy. Reducing the frequency of seizures can greatly lessen the burden of epilepsy.2 With approximately one-third of people living with epilepsy still unable to control seizures, there continues to be a need for new therapies.4 Up to 40 percent of people living with epilepsy do not respond to the first or second monotherapy5, and approximately 36 percent do not have adequate control of seizures despite the use of two or more antiepileptic medications6.

“Epilepsy is a common medical condition. About a third of the approximately three million people in the U.S. who have epilepsy do not have fully successful treatment with current approaches,” said John Stern, M.D., Director, Epilepsy Clinical Program and Professor, UCLA Department of Neurology. “The approval of APTIOM as a monotherapy for partial-onset seizures is based on clinical studies that provide valuable information regarding the treatment of people with epilepsy.” 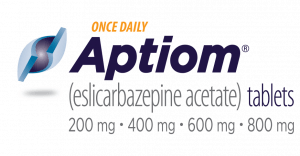 For more information about Aptiom® (eslicarbazepine acetate) please see the APTIOM Medication Guide and Full Prescribing Information at www.APTIOM.com. If you are pregnant or plan to become pregnant talk to your doctor before taking Aptiom®. Patients seeking medical information, financial support and other information can access Sunovion Answers at http://www.aptiom.com/sunovion-answers.html or by calling 1.844.4APTIOM (1.844.427.8466) Monday through Friday, from 8:00 a.m. – 8:00 p.m. EST. You are also encouraged to report any negative side effects of prescription drugs to the FDA. Visit www.fda.gov/medwatch or call 1-800-FDA-1088.

Sunovion is a leading pharmaceutical company dedicated to discovering, developing and commercializing therapeutic products that advance the science of medicine in the Psychiatry, Neurology and Respiratory disease areas to improve the lives of patients and their families.

APTIOM is used under license from BIAL.