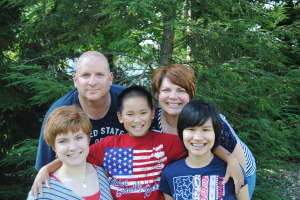 Ashley was a child who went through every possible bad sleeping habit known to man. The year that she was in 3rd grade was particularly awful. So, in order to get some sleep, I would often let her sleep in bed with me on the weekends. Brian was often at the races on Saturday nights and didn’t get home ’til late anyway.

On one such Saturday night, I thought Ashley was having a bad dream. I went around to her side of the bed and tried to wake her, but she didn’t respond. I tried sitting and standing her up. I yelled for Brian to come help me. By the time he got upstairs, Ashley’s eyes were rolled up in her head and she was shaking uncontrollably all over. I know now that she was having a grand mal seizure.

We spent the next day in the emergency room. They did a CAT scan and an MRI. The results of both came back normal. We were sent on our way.

The seizures continued – always after Ashley was in bed for the night. We visited our pediatrician who referred us to a pediatric neurologist. I was less than thrilled with this doctor who performed various motor tests on Ashley and then, right in front of Ashley, told me that she would “always be slow” – that she’s probably always going to struggle with school work, etc. After an EEG, she diagnosed Ashley with Benign Rolandic Epilepsy(BRE).

I had been keeping track and I could pinpoint every time that Ashley had a seizure to a day that she had ingested Aspartame in some form during the day (even something as small as a stick of gum). I asked the doctor if there could be a connection, but she was adamant that there couldn’t be. She said the seizures should go away once Ashley had “completed puberty” and, unless she started having day-time seizures, there was no need for medication.

Once we got home for the diagnosis appointment, I started doing my research on BRE online. (I really don’t recommend this in many instances because it tends to make you worried and panicked, but I’m a researcher and I wanted more information than the doctor gave me.) I realized that while Ashley was experiencing grand mal seizures, that she had actually been experiencing mini-seizures for some time before this.

Witnessing the seizures was just awful. Afterwards, she would be able to tell us that she could feel them coming on, but was already non-verbal and wasn’t able to yell to get our attention. I would always hear her and rush to her bedside and just sit with her through them. Sometimes being a parent can be a very helpless feeling.

Ashley experienced a few more seizures after that time. But, fortunately for us, she did outgrow the condition once she hit puberty. She has been seizure-free for about 8-9 years now.

How We’re Dealing with It

To this day, Ashley reads the nutrition labels on EVERYTHING. Did you know that most gums – even the ones that aren’t sugar-free – contain Aspartame? We steer away from all diet drinks around here. Up until recently, we didn’t keep any artificial sweeteners on hand. (We’ve since realized that she’s fine with both Sweet ‘n Low and Splenda.) (We often wonder if Aspartame would still cause her to seize, but we’re too scared to test it out.)

We’re glad that we can now look back on Benign Rolandic Epilepsy as a memory, as something we experienced for a time, but we’re past it. If fact, when I told Ashley what experience I planned to write about this week, she said , “Oh, I kinda forgot I even had that!” I’m glad it’s a distant memory for her! When I hear of other children who experience seizures, it all comes flooding back, and I can understand how those parents must be feeling – the fears, the questions, etc.

I’m happy to report that the pediatric neurologist was WRONG . . . Ashley has never been slow in any way. She’s never had any learning issues in school. In fact, she continues to excel in many ways. She has definitely proved that doctor wrong.

If you have a child who experiences seizures for an unknown reason, you may want to research BRE a bit. The good news is that it is outgrown!