I got a wake up call when I attended the American Neurological Association’s Annual Meeting. At the meeting I heard Alica Goldman, MD, PhD, of Baylor College of Medicine present her research on SUDEP or Sudden Unexpected Death in Epilepsy. She began her talk with a note on how the incidence of SUDEP is grossly underestimated and could affect a range of 5% to 18% people with epilepsy.

Additionally, people with epilepsy are 24 times more likely to die than the general population. But that wasn’t what blew me away.

I sat in shock as she presented her findings on the risk factors associated with SUDEP as determined from animal studies. I had always understood that SUDEP was something that only impacted people who had refractory epilepsy. But if Dr. Goldman’s animal models hold true in humans, then I was misled.

According to Goldman’s animal model research, increased risk factors include the following:

She also spent a great deal of time focused on the role of the neuro-cardiac connection. When someone is pronounced dead it is known that the person has stopped breathing or the heart has stopped. It is also known that seizures are associated with prolonged and severe respiratory depression. I have to admit, the science on this is a bit over my head. However, Maromi Nei, MD, published a piece that dovetails nicely with Dr. Goldman’s research.

The risk factors were too familiar for my comfort level.

The only thing working in my favor right now is that I am a woman! 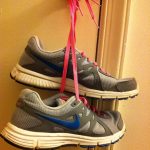 Every time I think about running I am overwhelmed with dread. You would think I would be out there every day, right? No, I am a body at rest. (you know, a body in motion will remain in motion, while a body at rest– oh you get it.)

Recently, my husband suggested I might want to blog about my reason for running and my progress. He offered it as a motivator, I of course took it to a new (unnecessarily complicated) level.

I’m going to add a section of the site called Running2live and keep you all in the loop on how I’m doing. DON’T expect a lot. It is really cold here. And I REALLY hate running.

But I love my husband and daughter and want to spend as much time with them as I can. Any suggestions are welcome!!