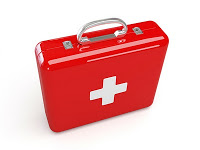 A few days ago my morning started off great. I hadn’t spilled anything on myself, the car was running, and I was on time as I headed into work. But that changed when I got to the train station.

I didn’t notice people standing around at first. But that day there were several men and women standing around gaping at something. As I paid my fare and walked through the turnstile my curiosity got the better of me. I turned around to find there was a woman on the floor in the midst of a convulsive seizure.

I grumbled something and paid my fare again to go back out the turnstile so I could help. The man who had called 911 seemed to be under the impression that she was having a heart attack. Argh.

I found an ID bracelet which the woman had detailed instructions on. I then asked that someone move the purse away from her arm. Then we stayed on the line with 911 until the police came and I told them what I had seen and what was on the bracelet. The woman was in the midst of a second convulsion when the ambulance arrived.

At that point I exited stage left. Paid my fare again and reminded the man who called 911 that he did a good thing.

It occurred to me how many people don’t know what to do if someone is having a seizure. The experience reminded me how important it is to communicate to the general public what a seizure can look like and what to do to help.

I found a site that details first aid instructions, for both convulsive and non convulsive seizures. The site talks about the 4 C’s of seizure first aid: Calm, Clear, Comfort, Call. I love the simplicity of this message. Go to www.epilepsyoutreach.org and take a look. Show it to someone else. Spread the word.

Maybe next time someone is having a seizure the person calling 911 won’t think she’s having a heart attack. Here’s hoping.