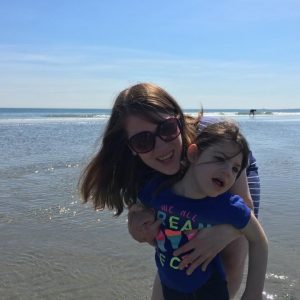 “Time to Build Castles” is taken from an Irish proverb, “It takes time to build castles.” For me, it means that nothing great can happen instantly. It takes time, planning, careful preparations, and even mistakes. I took this for my blog because when you’re raising a child with disabilities, it’s important not to get caught up in the speed at which things are happening around you. We started slow and are building a solid foundation!

Being a helicopter parent

I may be wrong, but I think by the time your child turns 7, they can likely sit and play by themselves with a parent nearby. They can take supervised baths and generally not have to worry. But, I have an admission: I’ve become a helicopter parent. Maybe not in quite the same way that it is defined by society, but, it’s something I have to be. Otherwise, Colleen could get seriously injured. Between where she is developmentally and with epilepsy, there’s just no question about leaving Colleen alone at any time. It just cannot be done.

Over Christmas break, Colleen came down with the flu. This made her myoclonic jerks a lot worse and also brought bath safety to the forefront. When she was younger, she had a lot less so I could sit beside the tub and she’d happily play and splash. That all changed when she had increased daily myoclonic jerks. Sitting next to the tub just isn’t close enough, even though I’m right there. Over the fall, as she was in the bath, she had a jerk and her head dropped into the water. It was an instant and even though I was right there, I felt like I couldn’t move fast enough. She was thankfully okay, but I was so afraid of her aspirating water. So, now my fear and anxiety have me in with her.

With Colleen, we know when she needs things, like when we got her wheelchair and her posterior walker. But, then there are situations like with the bath where we didn’t know we needed something until a situation happened. When her service coordinator stops by, one of the things we go over is things Colleen would need that would make like easier. Things like lifts, ramps, accessibility options. I brought up the bath concern with the coordinator, and now we are looking at bath seats that would be used. I feel bad that a lot of the fun things she enjoys would be hindered, but I know she will still be able to still splash and play, and momma won’t have a heart attack!

Her daily life is constantly evolving. There are times when I think we won’t need a lot because she is very capable and getting stronger. But now I’m realizing more and more that there could be possible setbacks, and things, like the shower chair, would be such a help. As her mom, I have to remain constantly vigilant against the things Colleen could get hurt on, knowing most of her capabilities and her understanding of her surroundings. But, as a parent, I don’t think there’s ever a time where I won’t worry. I do think in this case, and with other parents of children with disabilities, it’s perfectly okay to be a helicopter parent! (Unless, of course, there’s a better word!)

Don’t forget to check out any of the Epilepsy Blog Relay posts you may have missed.