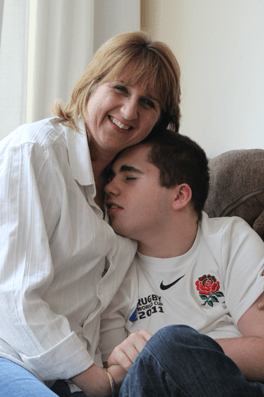 Matthew Williams was born on the 8th September 1994 and at the age of nine months old he had his first seizure, this seizure lasted for about twenty minutes and was the start of a very long and traumatic journey for my family.  At one stage Matthew was having prolonged bouts of status epilepticus and many nights I spent in hospital with him in intensive care not knowing whether he was going to live or die.

I watched my son seize for hours in some cases and the future looked extremely bleak.  Matthew was put on a lot of medication and the side effects from these started to become unbearable.  In the beginning, when your child has a seizure you hold them and pray that they are going to be ok, that they are not going to die. But for us it got so bad that when Matthew had yet another prolonged attack, I would hold him and pray that he would die as I just couldn’t bear to see him suffer so much – then of course the guilt takes hold of you for even thinking such a thing.  The more medication Matthew was put on, the worse his seizures and quality of life became.

I first found out about the Ketogenic Diet when Matthew was about 2 years old, but when I asked Matthew’s Paediatric Neurologist about it, she said that the diet did not work, that it was unpalatable, the children were sick through it and medication was by far the better option and was made to feel guilty for even suggesting the diet being told “don’t you think your son is suffering enough without putting him through this diet as well”.  I believed her and did what I was told like a good patient. I carried on with the merry-go-round of different medications, but nothing seemed to stop Matthew’s seizures and if anything they were making the situation a whole lot worse.   Matthew was also assessed for brain surgery, but by this time he had so much scarring and damage to his brain because of all the seizures, that there was no way that they could carry out any kind of brain surgery that would be of any benefit to him.

The drug merry-go-round went on for nearly six years and periodically in that time, I kept on asking for the diet and kept being refused.  By this time, the film ‘First Do No Harm’ had been made highlighting the Ketogenic Diet, but when I questioned the doctors, again, I was told it was ‘Hollywood hype’ and the diet really didn’t work that well and that this film did not give the details of all the terrible side effects that there were with the Ketogenic Diet and once again I was told that drugs were the best option.  However, Matthew was having terrible seizures every day, numerous tonic clonic seizures, drop attacks, absences as well as myoclonic jerks so powerful that they would knock him off his feet.  The doctors said that IF he made it to the age of 12 then he would probably need to be in a residential placement as we would not be able to deal with him living at home anymore.  The family fell apart and I was now a single mother of not only a severely disabled little boy but also his younger sister Alice whose life was also a complete misery as everything had to revolve around her brother.

When Matthew was 7 years old, on a yearly routine appointment with the same neurologist, I insisted that I wanted the diet because basically there was nothing else left to try.  It was a choice of going through the same drugs he had tried before but in different combinations and more of them OR get him onto the ketogenic diet.   There was no choice as far as I was concerned.  I had to tick that box.  The side effects of the medications were awful and his quality of life was so poor already that it really could not have got any worse for any of us.

Thankfully, Professor Helen Cross OBE  and Dr Elizabeth Neal RD had just started their Ketogenic Diet Clinical trial at Great Ormond Street Hospital. So, we were referred over to see them, and Matthew was accepted to take part and within 2 weeks of starting the classical Ketogenic Diet. Matthew’s seizures had reduced by 90%, and within eight months of starting the diet he was off ALL medication!

His quality of life improved dramatically.  No longer were there terrible side effects from the medication. No longer did Matthew scream all day. No longer was Matthew aggressive to anyone around him by biting, hitting and pinching. No longer did Matthew try to knock over furniture in the house and generally disrupt the whole family. He was calmer, happier, more relaxed, sleeping and turned into a very loving little boy.  I had finally got back what was left of my son, and my daughter could finally have some kind of sibling relationship with her older brother.  It was a joy to watch.

The fear that I was made to feel over the side effects of the diet were totally unfounded.  Matthew experienced NO horrendous side affects to the diet whatsoever, Matthew was NOT sick all the time and the food was NOT disgusting and unpalatable.  In fact in some cases, it was more difficult for Matthew’s sister Alice, as there was Matthew eating a nice Keto blueberry muffin and a banana milkshake for breakfast, whereas his sister was only allowed a bowl of cereal or some toast!  Matthew was on one version or another of the diet for nearly six years and did just fine, the only reason he was kept on it for so long was because I was too scared to wean him off!

During this time, we also discovered that Matthew had Dravet Syndrome, a catastrophic epilepsy syndrome.  It was with this diagnosis that we understood why some of the drugs had been so horrendous for him, as they were not suitable to be used with Dravet Syndrome, no wonder Matthew was so unhappy and suffered so much with life threatening seizures.   We also know now that Dravet can respond very well to ketogenic therapy and that was the treatment he had needed but had been denied for so long. Instead he had been put on a cocktail of drugs that were not suitable for his condition.

He was eventually weaned off the MCT ketogenic diet in August 2007 and the seizure numbers never increased from what they were when he was on the diet.  The only slight problem we had was that they increased in length of time slightly.  With that in mind, I discussed things fully with Professor Cross and we decided to try him back on a very small dose of Epilim, which is a drug recommended for Dravet.

Although at the time it felt like I was taking a step backwards, understanding his diagnosis made it clear that he did need something to keep things under control to give him the best quality of life possible, be it drug or diet.  We decided that as he had been on diet for 6 years, we would give him a ‘keto break’ for a year and try him on a little Epilim and then review after a year.

Matthew is still on that keto break today at the age of 26 (and still living happily at home with me I hasten to add!) as he takes 600mg of Epilim twice a day and that was enough to bring the seizures he had left back down in length of time to about 40 seconds.  This we could deal with and it didn’t affect his quality of life.  He has no terrible side effects and for Matthew, this is HIS therapeutic dose of medication.  If ever things changed and went downhill, then I would have no hesitation in putting him back onto ketogenic therapy and weaning off the medication.   Monotherapy is always my goal for Matthew.