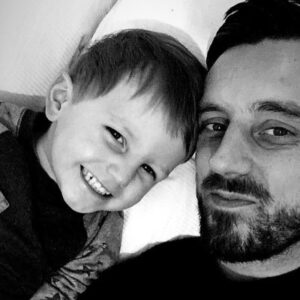 February 26 2016 will be a day etched in my brain forever. We had just collected Henry from his childminder. It was quite rare for his mum and I to both be able to collect him together and then collect his sister from school; we both finished work at a similar time on this particular day so thought it would be nice to do it together. We arrived at Henry’s childminder’s house and he had just woken up from a deep sleep. As I lifted him up, his knee “jerked”. Quite strange, I thought. But I thought it was him still waking up fully. He was just 11 months old so he couldn’t communicate how he was feeling. I strapped him into his car seat and we made the 5 minute journey to his sister’s school. I parked and something just told me to look in my rear view mirror. To this day, I don’t know what that ‘sign’ was. I just did.

His car seat was rear facing so I couldn’t see his face, however, his leg was dangling over the edge and shaking. His mum and I quickly got out of the car and she unstrapped him. He was violently, stiffly, shaking in her arms. What is happening to our boy? We ran with him into the school reception. I immediately called for an ambulance. In the reception area was an off-duty midwife who announced to us he was having a seizure of some sort. The paramedics were there within minutes and started to work on him. “Does he suffer from seizures? Does he have epilepsy? Has he had this before?” So many questions. No, no, no. Mum and Henry were whisked to the hospital in the ambulance. I followed in the car. Weirdly, I was concerned about getting a ticket so wanted to drive up. Deep down, I couldn’t watch my son go through whatever it was he was going through. I have zero recollection of driving to the hospital. No idea. All I remember was breaking every speed limit; I arrived before the ambulance. (Do not break speed limits, kids. It’s foolish and dangerous.) I parked right outside the emergency department. This time I didn’t care where I was parked. Shortly after, Henry arrived and he was taken straight into the resuscitation room. He was still fitting. Doctors and nurses surrounded our boy. His mum and I directed to a parent’s waiting room; a small room with a coffee table in the middle. We had a lovely nurse come in with updates and offers of tea. (It’s a British thing. Tea makes everything better.) Finally, he stopped. We were allowed to see him. We spent 5 days in hospital from that moment and he was diagnosed with a Febrile Convulsion – fairly common in children Henry’s age; when there’s a temperature spike, your body goes into shock.

One month later, Henry celebrated his 1st birthday. All was fine with the horror of 30 days before being put behind us. But, in my mind, something still didn’t feel right. I felt I would often see him jerk. But then he would smile and just go about his day. I must have been imagining it.

Fast forward a few months… we are sitting on the couch and then Henry suddenly slides down before going into another seizure. NOT AGAIN. Yes. Again. This time, no temperature. This is not a Febrile Convulsion. Paramedics called, whisked to hospital, into resuscitation. Another prolonged seizure. We needed answers. Another hospital stay.

We were booked in for an EEG. From that, it was confirmed he had Epilepsy. Our lives just changed forever.

Fast forward 3 years; Henry has had multiple hospital admissions, including stints in ICU, more tests than I care to remember, prescribed and tried on almost every AED and become best friends with all the staff at the local hospital. (Seriously, they’re incredible.)

We’ve recently had a genetic report back which suggests that Henry has Dravet Syndrome in one of his genes but in another part, there isn’t a documented case anywhere in the world so he really is the rarest of the rare.

With Dravet comes a high risk of SUDEP (Sudden Unexpected Death in Epilepsy). We all know how petrifying that sounds. That’s why I’ve dedicated the last 3 years into knowing as much about epilepsy as I possibly can. I’ve made friends within the community – friends that really have gotten me through the rough and tough times – advocated for others, shared my story and now run the only Life Elektrik meet up group in the U.K.

Henry is such a special little boy who spends most of the day laughing and smiling. He’s loved by all and has touched people literally around the world. But this battle will forever be ongoing. I want to do more to help others. I want to play a part so one day, a parent doesn’t have to feel as scared as I do every single day. I want to raise awareness. I want to raise money for research. Anything.

If you want to connect for some advice or just someone to talk to – parent to parent, man to man, sufferer to parent of a sufferer, I urge you to message me. I know what it’s like. And it’s good to talk. Feel free to reach out on twitter at @epilepsy_parent.

To everyone affected by this condition, you’ve got this. We’re all in this together. Let’s not just play the game anymore, let’s change the way the game is played.

NEXT UP: Be sure to check out the next post by Alison at livingwellwithepilepsy.com for more on epilepsy awareness. You can check out any of the Epilepsy Blog Relay posts you may have missed.