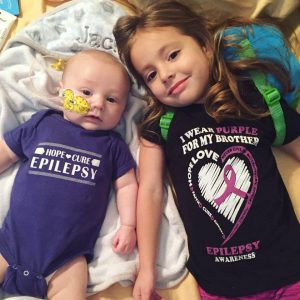 “How many seizures has your baby had today” asked my 3.5-year-old daughter, Rowan, as she regards her new little brother in my arms with a challenging look on her face. I answered, playing along, “uh, none so far today”. As Rowan held a little baby doll donning an NG tube just like Jack, her little brother nestled in my arms, she told me, “Well my baby has had three seizures so we have to go to Egleston, see you later.” And away she pranced clutching her special needs baby doll and click-clacking in her too big plastic princess heels. My first thought was that I should probably tell her not to play that game at school; and then, is it even healthy to let her play “seizures”? My insides burned with regret because in just a few short weeks since her brother’s birth, Rowan’s life has changed so drastically that she now plays seizures, hospital, and therapy games with dolls. But now, over two years later, I can so clearly see the truth in what my daughter was doing in her newfound play activities. My 3-year-old had already adjusted to her brother’s special needs and was waiting on everyone else to catch up. I felt it then, but I know it now: she will always be his biggest advocate and best friend.

Epilepsy has changed my little family in unimaginable ways. While it has caused so much heartbreak, epilepsy has also provided a certain perspective that we may have otherwise never gained. However, there is no perspective to be had when you’re in a fight for your child’s life so it was difficult to watch my daughter playing “seizures” when my son was still an undiagnosed infant suffering intractable epilepsy and frequent hospitalizations. It’s interesting the little things that pop into your head while you’re suffering a trauma, especially one involving a child. You can find cruel and unique ways to blame and punish yourself for what has happened. For example, I didn’t know if I wanted a second child as Jack Jack was quite the surprise. I didn’t put this fear of the second child into words until I was pregnant with Jack and I told my family that my biggest concern about having another child was that it would take something away from Rowan’s life. It was hard for me to imagine loving another baby as much as I loved my daughter, who had been at my side for three full healthy happy years at that point. What if something is wrong with the baby? I had recently watched a show that portrayed special needs in children as scary and detrimental. I was worried in a way that I never was when I had been pregnant with my daughter. Maybe my body knew what my mind wasn’t ready to hear yet, but for a long time I blamed myself for saying those words out load and making them true. We can justify almost anything during times of tragedy, but my daughter has never seen her life as compromised or degraded in any way since her brother’s birth and I could not be more grateful for that.

Rowan has continued to show the same sort of uninhibited love and acceptance for her brother as he has grown and gone through many changes with his medical needs. As he struggled to learn how to walk, she cheered him on and drew photos of him using his walker alongside the family. When I reprimand Jack for trying to take his shoes and SMOs off in the car, Rowan will pipe up and say, “he’s just using his hand motor skills like you always want him to”. How do I even argue with that? I can’t tell Rowan not stick up for her brother just because it will take me another ten minutes to get his orthotics and shoes back on. I can’t feel anything but pride in a big sister who is protective, empathetic, and aware. Nothing will ever take away the sting of epilepsy, nor the strain it puts on a family, but it doesn’t have to devastating all the time. All of Rowan’s friends/their parents know the words epilepsy/seizure and none of them are frightened or feel uncomfortable by these words or the cute little boy they usually surround because of his amazing big sister. Rowan continues to spread awareness in Kindergarten this year and has formed two special connections with teachers (not even in her grade) based around her brother’s special needs. Both teachers have made a point to tell me about these experiences with Rowan and I was once again blown away by the power of a special needs sibling and the connection of community. One of the two teachers has son with epilepsy also and now she always speaks to me when I visit the school or am in the car rider line and has even told me to reach out if we ever need anything. The other teacher is incredible at sign language, making her a Rockstar to Rowan because of all the signing we have done and still do with her brother. Rowan has blossomed as a big sister, thriving despite the obstacles, and become the best 6-year-old epilepsy awareness advocate around. It’s important to me to show both of my children how proud I am to spread awareness about Jack’s rare disorder and different needs, while also demonstrating that epilepsy doesn’t define Jack, nor does it define our family.

NEXT UP: Be sure to check out the next post by Rafaela at livingwellwithepilepsy.com for more on epilepsy awareness. You can check out any of the Epilepsy Blog Relay posts you may have missed.