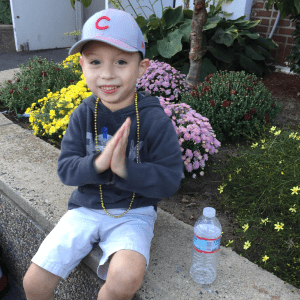 Nicholas is 7 years old and was diagnosed with infantile spasms around 6 months of age. He had 50 to 60+ seizures a day for about 2 1/2 years straight. The doctors tried every possible medication available at the time to control them with no luck. Finally after a tough 3 years and medication, he was seizure free.

That was until about 6 months ago when the seizures came back. He was hospitalized and we were told that they have come back in a different form. We were told this could happen but had hoped it wouldn’t. Everything had been going so well but they kept coming back.

Unfortunately, the seizures have set him back developmentally. He doesn’t eat solid food and his main source of nutrition is a pediatric nutrition drink. He lost the ability to eat solid foods when he was put on the ketogenic diet to stop the seizures. Since then he will not touch food.

Communication is also a problem. Nicholas is about one year old developmentally. His speech is very limited and he does not talk much. He can say mommy and daddy and knows his colors. He is learning but has a long road ahead. He also suffers from cerebral palsy on his right side… doctors don’t know when or how this happened either but it limits his function on his right side.

Throughout all this he smiles every day, loves music, NASCAR, WWE, monster trucks and watching his brother play hockey. We have learned a lot as a family and dealing with this disease. It’s not easy, but if Nicholas can smile so can we.

We never know what tomorrow will bring and making plans is hard to do, but my intention is to raise awareness and let others know that they are not alone. We have been there and are still there. We will not give up.