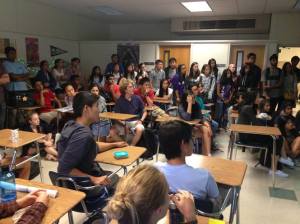 Students in a high school club in Cupertino, CA are making the world a better place for people living with disabilities.

The Differences Among Us

The club, called “The Differences Among Us” (TDAU), embodies two main goals. The first goal is to educate students and community members about different disabilities and disorders. The  second goal is to promote acceptance. Each year, the club focuses on several disabilities and holds project events to culminate the study of a given disability. The students also hold general events throughout the Cupertino community.

Members of the TDAU club reached out to Living Well With Epilepsy for suggestions of projects they could do to describe epilepsy and raise awareness. Below are a few of the suggestions we provided:

Watch “A Seizure by Nathan Jones”. Following the short film have a discussion about what surprised you and what didn’t.

Break into small groups of 3 or 4. 1 person is designated to experience a seizure. That person puts in ear plugs, closes their eyes, is moved to a different part of the room. Then the rest of the group spins the person for 20 seconds. Then the person is laid down on the floor, the earplugs taken out and eyes opened. There should be a sense of dizziness and confusion.

Taking it to the next level

The group was so moved by the movie (kudos to Nathan Jones!) and the project that they decided to make epilepsy the focus of the entire first quarter. They also found a way to involve the rest of the school.

Getting the whole school involved

The Differences Among Us club has planned a project to raise epilepsy awareness in their school. On a select day in November, club members will walk around campus wearing a letter or piece of the word “epilepsy” on a board around their necks. Throughout the day, they will approach students and teachers with a question eliciting a response that may help them empathize with some aspect of the lives of those who live with epilepsy.
For example, in the book “Beautifully Different” by Natalee Righetti, she discusses her experience with epilepsy and the anger and embarrassment that accompanied each seizure, which rendered her helpless and not in control of her body. To convey this feeling, some members will approach students with the question:

“Recall a time when you were not in control of a situation or your body. How did you feel?”

Each student will be asked to respond with a one word answer.

If you would like to participate, you can submit your answer to this question below in the comments.

The answer by participants in school will then be written in the letter that the member is wearing, so that by the end of the day, each letter is filled with adjectives describing different emotions or experiences that could be associated with having epilepsy. Each member will then explain epilepsy to each student, the purpose of this question, and educate them about one type of seizure.

Another aspect of the TDAU Epilepsy Awareness Day involves handing out candy with notes attached to it discussing a particular myth about this condition. Finally, during their lunch break, the students plan to walk around campus with a white board saying, “I live well with ____ and it makes me ____”, in order to get students to relate some aspect of their life that makes them stronger and more powerful to those that are “Living Well with Epilepsy”.

Bring TDAU to your school

Don’t forget to include your one word answer to TDAU’s question in the comments below.