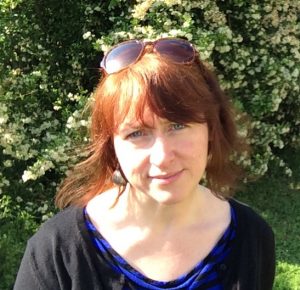 At 29, I began to experience mysterious episodes of dé­jà vu and hallucinations followed by nausea and exhaustion. The only thing I could remember was stringing random words together to form incomprehensible sentences. Primary care physicians were useless. They did random tests and guessed at conditions. I received a different diagnosis with each new doctor: social anxiety disorder, a sulfite allergy, and my all-time favorite, early menopause. Seriously, I was once referred to a gynecologist but never to a neurologist.

Five years later, I had my first and only tonic-clonic seizure and got an accurate diagnosis: temporal lobe epilepsy. Turns out the episodes were focalized seizures. Like I suspected, they had nothing to do with menstruation. Language comprehension, naming, and recall are cognitive functions regulated by the temporal lobe. Hence, the word problems. My brain was the culprit.

Medication stopped the seizures but the language problems have gotten worse. I do not articulate well. In fact, I downright suck at it. Words leave my mouth like hippies climbing out of a Volkswagen bug: stumbling, nonconforming, and yes, at times, dirty.

I mix up words. I say things backwards. I forget words. Words hang at the tip of my tongue.

“Close the milk after you put away the fridge door.” Ugh.

I randomly blurt out words I had been trying to recall hours or even days earlier. “Burnt Sienna!” It took me a week to remember a simple name for a Crayola crayon color.

I once said congress of the cow instead of congregate. Oops.

In the case of tip of the tongue, I ask for help. “What do you call average people who aren’t experts at something?” Novice? No. Layman? Yes!

I recently told my boss to enjoy “hot gods and manburgers” over the holiday weekend. We had a good laugh. Years ago, such mistakes upset me. I hated sounding like a fool but I’m over it now. I found ways to cope with the disappointment and frustration. First and most importantly, I stopped beating myself up. Just because I say “hot gods” doesn’t mean I am stupid. The second is I stopped panicking and have slowed down. It’s not a race. If I blunder a sentence, I pause, regroup, and calmly start over. I used to ramble on trying to fix the mess, just making it worse. I used to just stop short.

I’m trying to be proactive. I enrolled myself in “articulation boot camp” to stimulate my lazy brain. I read books on random topics, like entrepreneurialism. It was kind of a snoozer but the exposure to new ideas and words seems worthwhile. I recently discovered audio TED Talks. They are like verbal coaching. The presenters have a limited amount of time to articulate concepts. Last week, I listened to a talk on plastic manufacturing and one on the benefits of smiling. I subscribe to Webster’s Word of the Day. Today it’s slumgullion, which is a meat stew. Once in a while I try to explain why I like a piece of abstract art to someone. That is a lark. And I practice writing for an hour. Most of the time it is just prose that ends up in the trash but sometimes I churn out something pretty good.

NEXT UP: Be sure to check out the next post by Alexis at https://livingwellwithepilepsy.com.