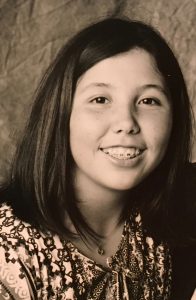 This personal story was submitted by Lisa, about her daughter Emily. I hope you enjoy learning about their experiences.

My story is about our 12 year old daughter, Emily. Since she was about three years old, she blinked when outdoors. About once each year, I would crusade to search for answers seeking out a specialist to try and come up with a diagnoses and a treatment. Emily could move and speak through them; the neurologist we saw at the time named it a motor tic. We sought psychologists and psychiatrists who suggested habit reversal therapy. The ophthalmologist stated that she blinked to attract attention. The next ophthalmologist suggested a nerve response to ptosis and prescribed allergenic eye drops or offered Botox as a remedy.

By the time she turned 10 years old, the social and academic response to her “motor tics” became more pronounced. Emily started having trouble remembering lessons, forgetting to turn in homework or forgetting the homework all together. I observed other peers or younger children starring at her. It broke my heart when she broke down in tears one afternoon when she said a young boy was looking at her funny and she felt “socially awkward.” I worked with her to come up with a response, “I have an eye-blinking motor tic that causes me to blink in the sun and I can’t help it. “ For the academic challenges, we took her to be evaluated by a psychiatrist and paid several thousand dollars for what resulted in an ADHD diagnoses and consequent visits to a therapist to come up with tools to manage– manage her school work, accept that she needed to develop tools to help her remember, handle her resentment towards her parents for reminding (aka nagging) her to do everything, cope with a younger sister for being more athletic, more academic, more socially acceptable, and basically manage everything that faces a pre-teen.

Mind you, Emily is smart. She can read a 1000 page book in one sitting. She can recall everything there is to know about Greek mythology. She has 42 Skylander characters that she can name without looking. Emily is also a talented artist. She has been on a swim team for over five years. We felt if we could inspire her with a different school that offered better teachers, more creative lesson plans and means to learn and more art, she would thrive.

At 11, the challenges from the new school increased, kids became a little cooler and she felt more awkward and alone. Thank goodness she had books. We finally saw another pediatric neurologist and insisted on an MRI and sleep-deprived EEG. They both came back abnormal and so Emily underwent a 48 hour in-patient EEG. These tests confirmed the eye-blinking were myoclonic seizures—Jeavons Syndrome. In lay terms, these myoclonic seizures were in direct response to sunlight. We started dose escalating with lamictal. Three months later, Emily experienced her first tonic clonic seizure, in English class, transported from school by ambulance to emergency. The school handled the situation the best I could have asked for. But Emily still felt humiliated. We increased her meds, and a few months later, she had a second tonic clonic seizure at school, and a few significant absence seizures that impacted several hours of memory and caused disorientation.

We added an anticonvulsant medication to the cocktail despite its side effects for moodiness. We paid $1000 for Zeiss blue lenses and frames that did not help. We tried wide-brimmed hats, a fashion statement that every 11 year-old girl wants to sport, and it did not help. Moving from California to Alaska was not an option, though I seriously considered it. We tried the ketogenic diet for a few weeks, but found it difficult to sustain. We seemed to have the blinking under control, but her memory still seemed impaired. So we decided to reduce and ultimately remove one of the anticonvulsants. The blinking came back. We dose-escalated slowly back up to the combination of two anticonvusant drugs and seem to be stable.

Later this year, we will go in for another inpatient EEG to hopefully confirm the absence of seizures.

My story is one of process. And I suspect we are still in the midst of it all. But I was given the advice from family friends who were tragically challenged with pediatric epilepsy, to have patience. “You know your child best,” they told me. Do your homework on the medications including any potential side effects, dose-escalate slowly and ensure you conduct base-line tests, in-process blood tests, take photos in case of rashes, and really observe how your child is responding to the medications. Advocate to your neurologist what you feel is best for your child. Keep a journal of significant events. As a mother, I wanted so badly to have a “cure” or a pill to fix what had been years of trying to figure out. But children, or at least Emily really couldn’t and still can’t articulate what she’s experiencing or feeling when she’s having the myoclonic seizures, and frankly she’s had them so long that she doesn’t know any different. Take a deep breath, and trust your gut. Take the time and this experience is not the type of process that anyone will enjoy, but know that once stability is achieved, you and your child will be safe–the foundation of health that is created will be the best one that you could have provided for her.

Let Lisa and Emily know they are not alone with a comment below or by submitting your own personal story.