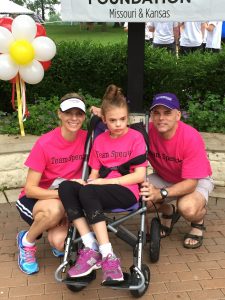 This post was written by Elizabeth Terry, a historian and author in St. Louis, and mom to Spencer who has Lennox-Gastaut Syndrome (LGS). Living Well With Epilepsy is grateful to Lundbeck, a Sponsor of the November 2015 Epilepsy Blog Relay™.

I remember my husband and I whispering to each other, “Is this normal?” We stood over her crib and our sleeping baby jerked suddenly, arms outstretched, fingers stiff. This typically happened a few minutes after she fell asleep. It was alarming. We didn’t know a thing about babies except that we were as in love with ours as any new parents, and, of course it was normal. It had to be.

But it wasn’t. Until her seizures became so intense she spent a few days in the ICU, we had no idea that she had been seizing the first thirteen months of her life. It was then, too, that we learned she wasn’t “normal” in other ways. In her hospital room, the doctors pored over my new-mother-meticulous-notes in her baby book. The milestones that I’d proudly written on the pretty pink scrapbook page suddenly darkened as the doctors explained they weren’t milestones after all. Our thirteen month old daughter was barely functioning at the level of a six month old.

Thus ended the blissful ignorance (and perhaps denial) of our parenthood. We found ourselves stumbling blindly down an unfamiliar road—we were afraid, we were clueless, and we were grieving the sudden loss of the motherhood and fatherhood we’d envisioned.

I’m glad no one told us how hard the next ten years would be. That’s right: our daughter, Spencer, has grown into a gorgeous ten year old. And everything changed when she was seven. That was when we bid goodbye to her neurologist who was off to help kids in another state, and we moved on to another of the best neurologists in the country. It was the new guy who told us Spencer had LGS. LGS, the acronym for Lennox-Gastaut Syndrome, is a rare and severe form of epilepsy, and is defined by a triad of characteristics: multiple seizure types, cognitive impairment, and an abnormal EEG with slow-spike wave complexes. Spencer has all of the hallmarks of LGS.

Why, oh why, didn’t her first neurologist tell us she had LGS? Of course, I know why. Clinically, it wouldn’t have mattered. Knowing that she has LGS doesn’t change our endless battle to control her seizures. It doesn’t alter her special education plan or her requirement for constant supervision. But it does matter.

Suddenly, when Spencer was seven, we were enveloped by the understanding arms of other LGS parents. Our home, filled with love and happiness, was no longer ground zero for seizures, worry, and fear. Those things are still there, but the LGS Foundation became the go-to place for all LGS parents, and it has given us comradery and hope. Nope, nothing clinically changed with the LGS diagnosis, except our future is no longer centered solely around bettering the life of our little girl. It is centered around bettering the lives of everyone who has anything to do with LGS.

Oh, it has been a hard road. My occasional self-pity is quickly stymied by remembering that Spencer has the tough life, not me. And yet she has this inner strength that makes Clark Kent’s alter ego look like the world’s greatest pansy. While her cape is invisible, her true power is to strengthen those around her through quiet forbearance of difficulty and her absolute focus on what is important: genuine belly laughing when someone sneezes, marveling at the kisses of a puppy, and sharing life with her ever-cheerful best friend, Elmo.

Our life is really hard. But it is also really great.

This blog post was sponsored by Lundbeck – a global pharmaceutical company committed to improving the quality of life for those living with brain disorders, including epilepsy. Lundbeck connects people living with challenging seizures at www.LGSTogether.com and through the LGS Together Facebook page (www.facebook.com/LGSTogether). Check out the Facebook page this month and #Flex4LGS to show your support of the Lennox-Gastaut syndrome (LGS) community. Lundbeck is also providing scholarships for families to the attend LGS Foundation’s Family & Professional Conference in April 2016. Learn more and apply here: www.lgsfoundation.org/conference.