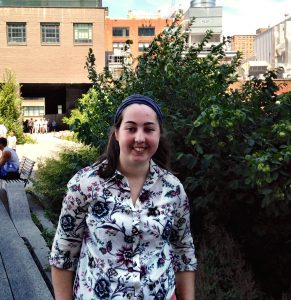 Emily is a normal, optimistic, 21 year-old college student. She dreams of completing her undergraduate degree, getting her masters in social work and traveling the world to do humanitarian work. The only thing holding her back is uncontrolled seizures.

Emily’s seizures began with nerve pain behind her eye when she was about 8 years old. At age 10, her parents took her to NYU Langone Medical Center where she was diagnosed with epilepsy. Now more than 10 years later medication has never provided complete seizure control.

With her plans for the future and her uncontrolled seizures, Emily made the decision to see if she was a candidate for resection. Meaning, she was willing to have a portion of her brain removed to control her seizures. However her team at NYU was not convinced a resection would be successful. Emily and her parents were pleased when the doctors at NYU offered another option.

Last Fall, the FDA granted pre-market approval for the RNS System and recently NYU Langone Medical Center became the first hospital, outside a clinical trial setting, to implant the RNS System in patients with intractable epilepsy. The pacemaker-like device, called the RNS System, was implanted by Werner Doyle, MD, an associate professor in the Department of Neurosurgery at NYU Langone.

“Medically intractable epilepsy is often a debilitating disorder that puts sufferers at risk from sudden loss of consciousness and uncontrolled movements. It stigmatizes patients and restricts their independence,” said Dr. Doyle. “Epilepsy surgery is an important therapeutic option for patients, which can significantly or completely control their seizures and return their lives to normal. The RNS device improves our ability to control seizures with surgery and now offers patients who may not have been surgical candidates in the past a surgical option.”

The neurostimulator is designed to detect abnormal electrical activity in the brain and respond by delivering electrical stimulation to normalize brain activity before the patient experiences seizures. When Emily spoke to Living Well With Epilepsy she mentioned that her RNS has been implanted and is collecting information but is not yet turned on to manage her seizures. She also noted that she will continue to take several medications for a period of time.

For now, Emily will take the summer to heal. Come September she heads into her senior year in college and she will need to stay sharp if she is going to maintain that 3.8 grade point average.

For more information on the RNS System you can contact the Comprehensive Epilepsy Center at NYU Langone.