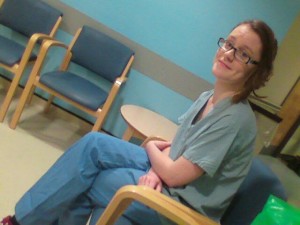 A diagnosis of epilepsy means that you have recurring seizures. It is a condition of the central nervous system; effects of epilepsy can be felt throughout the body. Most people don’t know a seizure is coming on, and due to this unpredictability, there can also be a great emotional toll, which I have experienced over the years.

Epileptic seizures can interfere with your heart rhythm and breathing. Because of this, I experience a constantly high heartbeat of 130bpm resting heartbeat, after a seizure it reaches it highest at 240bpm. Over the long term, epilepsy increases risk of heart disease and stroke.

During a seizure, signals from the brain can tell your muscles to contract and relax (as in convulsions, for example). A seizure may cause muscles to jerk uncontrollably. In some cases, you can lose muscle tone so quickly that you fall down. This is often referred to as a drop seizure. When muscles surrounding your vocal cords seize up, it pushes out air. As an example, when I have a seizure it sounds like a cry or a scream because of the air being pushed out.

Effects of epilepsy on emotions and behavior

Concerns about the effect of having recurring seizures on an individual’s emotional state and behavior are often raised. In most cases such changes are caused by the strains of dealing with our society’s attitude toward disability in general and epilepsy in particular. I want to show people that epilepsy is more than what it seems, and that it doesn’t change us as a person. That aside, though, medication and the seizures themselves can affect a person’s emotional state. Keppra medication personally effected me and my mind, I experienced a feeling of constant dread, distress & hopelessness.

Find a place inside where there’s joy, and the joy will burn out the pain – Joseph Campbell

Fear of having a seizure

A person living with seizures may be anxious about other people’s reactions to a seizure. Many people who witness a seizure may react by being afraid and embarrassed by the situation. Since the individual who has seizures has no control over other people’s reactions during a seizure, he or she may prefer to stay alone and in isolation, so nobody has to experience it other than them.

Being stigmatized for having epilepsy is also an important aspect in the emotional toll of seizures. Popular misconceptions about epilepsy are still widespread. Again, other people’s negative responses may considerably add to the stress of the person with epilepsy and may lead them to choose isolation over social interaction. Always remember this: You may have epilepsy, but epilepsy does not have you!

If you ever see somebody having a seizure, would you know what to do? If no, then keep reading below:

For a tonic-clonic seizure

IMPORTANT: Don’t put anything in the person’s mouth, including your fingers. They may bite their tongue, but this will heal. Putting an object in their mouth could cause more damage.- Source NHS