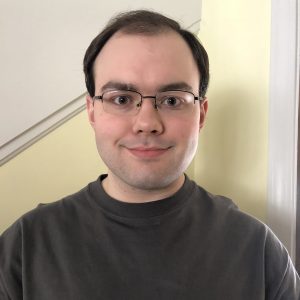 Our son, Alex, was diagnosed with autism in 1998. Before he acquired language, he made noises all day, every day. When he started to speak around the age of three, a lot of it was echolalia – repetition of things we had read to him or he had heard on a video.

These days, Alex’s vocabulary is professorial, his language spontaneous and entertaining. He also still scripts a lot. However, this is now a great source of comfort since he was diagnosed with epilepsy three and a half years ago, because I know that if I hear him talking, he’s not having a seizure.

In 1998, I knew nothing about autism so I started reading. In twenty years I’ve studied a LOT. Occasionally, I came across the statistic that up to one third of individuals with autism will also eventually be diagnosed with epilepsy. I never dismissed it, but I never dwelled on it, either. Our child has also had to deal with overwhelming anxiety and Tourette Syndrome, so in my mom mind, there was just no way he would be saddled with anything else.

But, in 2014 out of nowhere, epilepsy barged into his life. It was loud. It was bloody. It was horrifying.
Alex had been doing so great. He’d graduated from high school the year before, was a volunteer at our local library and his high school library, and cleaned at his dad’s office three days a week.

That morning, the next to last day of July, was a low key one with plans to go to a local fair in the afternoon. Alex was hanging out in his room. I was upstairs on the phone with my son, Patrick, while looking for customer information on his laptop, and just steps away from Alex’s room. I heard a crash and Legos falling to the floor. I really thought he had simply dropped one of his new Lego projects. But, when I called his name, he didn’t answer. I rushed in and found him unconscious, seizing on the floor. There was blood everywhere from a gash on his head. I just started screaming and told Patrick to hang up. I only knew that I needed to call 9-1-1 and could not even relay to poor Patrick what was going on. I will regret that forever because he must have been so frightened for his little brother, not knowing what the heck was happening. I’ve calmed down a lot since that day when faced with a seizure.

The week following Alex’s tonic-clonic seizure was filled with many tests. We were then referred to a neurologist at a major medical center far from our home. Two weeks later in her office, she gave us the news that he had epilepsy, as the EEG had shown irritability on the right side of his brain.

I HATED that he tried so hard at everything he did, but now had to deal with yet another hurdle. However, we WERE glad to have an answer and medication that the doctor was confident would keep him seizure free. Except for the initial adjustment period, Alex did well on it for two years.

Because of some of the other limitations Alex faces in his life due to his autism, controlling his epilepsy is a family effort. While he is very articulate and certainly knows how he feels, it is up to us to make sure he gets enough sleep, help him manage his days to lessen his anxiety, and keep him safe.

More changes in search of control

In February of 2017, however, he had another seizure. Another followed in June, and then two more, each one month apart. It was a difficult summer for our guy who loves to swim and bike, because when you have a seizure those activities are put on hold for safety.

We were finally able to reach a therapeutic level with Alex’s medicines and he has now been seizure free since August 2017, but I still worry daily. I recently asked him if the possibility of having one worried him. He matter-of-factly replied, “Well, no, because I know now that when I get that ‘heavy head’ or ‘abnormal dizziness’ feeling, I should lie down on the floor in a fetal position and I’ll be okay.”

With his last seizure, he knew it was coming on and got himself to the couch. The next day, we discussed an even safer option of immediately lying on the floor on his side next time.

It wasn’t until this year that we felt comfortable talking about his epilepsy. We came to realize that just like educating others about autism has helped people better understand Alex, providing as much information about epilepsy and what his seizures look like can only help keep him safer if others aren’t afraid to help.