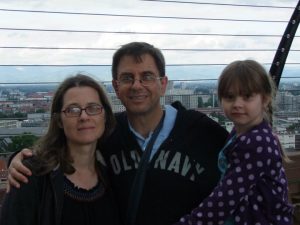 This post is part of the Epilepsy Blog Relay™ which will run from March 1 to March 31, 2018. Follow along!

Desiree writes, Brain Blips: An Epilepsy Journey, where she writes about their family and having a child with epilepsy.

At some point, after I met and married my husband, I learned that his father (whom we’ll call Paul), a successful chemical engineer, had epilepsy.

Back then I knew very little about epilepsy. And sadly, the little bit I thought I knew–which came by word of mouth and from TV–was mostly wrong.

I wish I could say that having a relative with epilepsy caused me to become more informed, but it didn’t. Acknowledging epilepsy’s presence in our extended family, let alone discussing it, I soon learned, was unwelcome.  Talking about epilepsy was perceived as uncomfortable in an unkind way.  The message was clear: epilepsy was a private health concern best kept private.

Because my father-in-law Paul’s epilepsy was very well controlled for most of his adult life, it was easy to forget that it was there.  The code of privacy, secrecy, and silence surrounding seizures was very strong.  On the rare occasions that Paul had break-through seizures (twice in two decades), the information that came through to us was minimal. It was enough to know that Paul had had a seizure; we didn’t need to know more, except as it might impact plans that included us.

NEXT UP: Be sure to check out the next post tomorrow at theworldofgorgeousgrace.com. For the full schedule of bloggers visit livingwellwithepilepsy.com.

TWITTER CHAT: And don’t miss your chance to connect with bloggers on the #LivingWellChat on April 2 at 7PM ET.