The Epilepsy Foundation of Metropolitan New York has been at the heart of the NYC epilepsy community for almost fifty years, and is New York City’s only specialized organization combining epilepsy education, awareness, and advocacy with individualized services such as counseling and vocational supports.

Living Well With Epilepsy is grateful to the Epilepsy Foundation of Metropolitan New York, a Media Sponsor of the November 2015 Epilepsy Blog Relay™. We encourage you to take a minute learn more about a few of EFMNY’s upcoming events below. 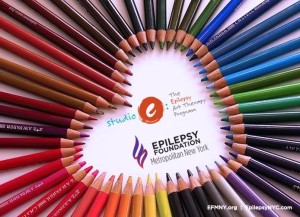 The Epilepsy Foundation of Metropolitan New York is excited to announce the first ever Epilepsy NYC Studio E Art Therapy for Teens!

Studio E offers a unique way for people with epilepsy to socialize with others and open up honestly about daily challenges in a trusting, creative environment. Art therapy promotes self-expression and builds confidence. Recent studies have shown that Studio E improves quality of life and
self-esteem.

After the great success of the Annual Studio E Program hosted by EFMNY and supported by well-received public exhibitions, Art Therapist Melissa Diaz joins us once again to provide an 8-session group program, in the same open studio model, but now tailored specifically for teenagers with epilepsy.

To enroll or learn more please contact Katie Lorenzo at klorenzo@efmny.org or call us at 212-677-8550.

The program is offered at no cost to participants. You must be 15-19 years old. Seating is limited and a phone interview with the art therapist is required.

The EFMNY is an Official Charity Partner of the 2016 United Airlines NYC Half Marathon! Race through Central Park and the streets of Times Square, catch beautiful views of the Hudson River from the west side highway, and finish at the iconic South Street Seaport. The 2016 United Airlines NYC Half provides you with an opportunity to transform lives in a direct and meaningful way.

EFMNY is looking for runners

Run on behalf of the Epilepsy Foundation of Metropolitan New York to raise money for epilepsy awareness but hurry, space on Team EFMNY is limited!

Run on behalf of EFMNY 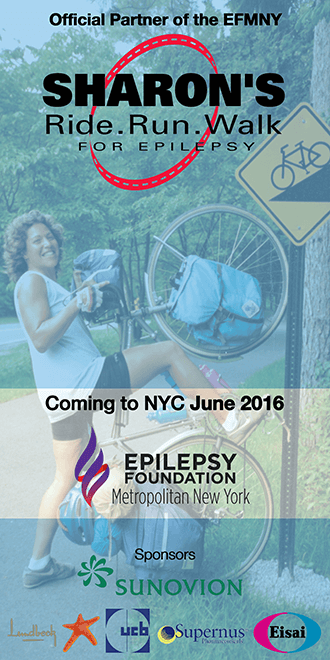 EFMNY is proud to announce its partnership with Sharon’s Ride.Run.Walk for Epilepsy, one of the nation’s largest and longest ongoing epilepsy education and awareness events, dedicated to the memory of Sharon Rosenfeld, a nurse and teacher, who cared deeply about epilepsy and advocated helmet safety.

Sharon’s Ride began in St. Louis in 1995, started by Dr. William Rosenfeld and Dr. Susan Lippman to honor Dr. Rosenfeld’s sister, Sharon, who was killed in a bicycle accident while bicycling cross country. Sharon was wearing a helmet and, unfortunately, nothing could have saved her; however, it is estimated that 5% of new cases of epilepsy and 75% of bicycle related fatalities among children could be prevented by wearing a helmet.

Sharon’s Ride will kick off the Inaugural Sharon’s Ride NYC in June 2016, and event proceeds will directly support the Epilepsy Foundation of Metropolitan New York. Sharon’s Ride raises awareness of the importance of helmet safety, that helmets worn during head injury-prone sports can prevent many new cases of epilepsy.

Dr. Rosenfeld continues to serve as chairman of the event’s nationwide series for the past 21 years, and continues Sharon’s legacy of raising awareness about helmet safety and epilepsy. To learn how you can get involved, please contact Chilton Harper at charper@efmny.org