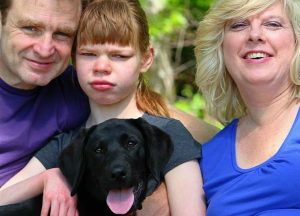 When we met Steve and Ruth Malez and began working with their daughter Rachael, then 9-years-old, she was in a wheelchair, couldn’t speak and suffered almost constant seizures. Yet even so, we could see the bond Rachael shared with her parents: from the smallest change in expression to the quickest glance, Rachael’s parents could decipher Rachael’s unique way of communicating.

Rachael began experiencing infantile spasms at six months old. By age 2, Rachael was diagnosed with Aicardi Syndrome, a rare neurological disorder characterized by seizures and the partial or complete absence of the corpus callosum – the structure that connects the right half of the brain with the left half of the brain. Epilepsy, or “seizure disorders,” affects one out of every 26 people. Aicardi Syndrome, however, only occurs in about one in 105,000 to 167,000 newborns in the United States, and researchers estimate that it affects only about 4,000 individuals worldwide.

One out of three people with epilepsy have seizures that cannot always be controlled with medication. As time passed it was apparent that Rachael is part of this group, and it was severely limiting her quality of life.

No cure or standard treatment

Typically, Aicardi Syndrome exhibits itself through seizures beginning in infancy, defects in the light-sensitive tissue at the back of the eye (chorioretinal lacunae), unusual facial features, gastrointestinal problems and additional brain abnormalities. The precise gene or genetic mechanism causing Aicardi Syndrome, which primarily affects females, has not yet been identified. Likewise, there is no cure for Aicardi Syndrome, or even a standard course of treatment.

When Rachael first began experiencing seizures, her parents’ lives changed drastically. Suddenly, frequent hospitalizations and doctor visits filled their days, and Rachael had to be treated with daily injections of adrenocorticotropic hormone (ACTH) because infantile spasms rarely respond to usual anti-seizure medications. These injections were usually administered by Steve and Ruth. Because of the frequency of her seizures, Rachael has spent most of her life in Ruth’s arms, simply being comforted. As those in the neurology field or affected by epilepsy well know, people who experience seizures say it is a moment in time where they’re unable to control their own movements, feel confused, and wake up completely exhausted and sometimes unaware of what just happened. Rachael experiences these disruptions multiple times a day, oftentimes carrying a risk of broken bones, concussions and breathing problems.

Frequent seizures have led to Rachael experiencing significant developmental delays, including her ability to talk and walk. We tried 14 different medications over time to help reduce Rachael’s seizures and while these efforts successfully brought her daily seizure count down from about 50 per day to ten to 15 per day, we wanted to do more. It got to the point where she was in the hospital at least once a month due to the frequency of her seizures and a high risk of pneumonia (very common in children with epilepsy). In addition, the sedatives in the medications severely limited Rachael’s ability to interact with her surroundings, including her parents.

As part of our efforts to continually be on the lookout for new research, treatments and technology to improve the care we provide patients like Rachael, we learned about a new device called the AspireSR. Through chest implantation, the device detects a rapid rise in heart rate as a signal for an oncoming seizure and then stimulates the vagus nerve (one of two extremely long cranial nerves that extend from the brain to the abdomen) to provide information to the brain in time to stop the seizure from occurring. In clinical studies of the device, seizures resolved 60 percent of the time. The device also comes with a magnet that caregivers can swipe over the device to stop a seizure without medication.

Desperate to improve Rachael’s quality of life, her parents agreed to try the approach.

We implanted the device on July 30, 2015, making Rachael one of the first pediatric patients in the country and the first patient in the state of Minnesota to receive the device.

Since it was turned on the week of August 17, 2015, Rachael’s seizures have become shorter, and we expect them to eventually reduce in number as well. Rachael is more alert and interactive and visits the hospital less frequently. Steve and Ruth feel comforted knowing the device responds in real time to seizures, especially when they cannot be in the same room with Rachael, such as when she’s sleeping at night or riding the school bus. Needless to say, these small improvements have made a monumental difference.

We hope this treatment results in fewer hospital visits and fewer seizures, ultimately reducing seizures to one per week.

We cannot always cure patients with severe illnesses, but improving quality of life is often a very positive step for families like Rachael’s. Rachael is on her way to becoming a shining example of the life-changing potential of continuous research and innovation.

With the responsibility of caring for the most amazing people on earth – children, comes the drive to seek ever more effective treatments to help them live better and, often, just be kids.

Dr. Dimitrios Arkilo is a pediatric neurologist at Minnesota Epilepsy Group, P.A. He is board certified in pediatrics and neurology with special qualifications in child neurology and epilepsy.  He attended Semmelweis University of Medicine in Budapest, Hungary and completed his child neurology residency at Tufts University-Floating Hospital for Children in Boston. Dr. Arkilo received several awards for excellence in teaching and research from Tufts University Department of Neurology while he was a chief resident at Floating Hospital for Children. He completed his fellowship in neurophysiology at the University of Minnesota-Twin Cities. Dr. Arkilo has published many peer reviewed articles and is involved in ongoing research projects.

Dr. Arkilo’s interests include pharmacogenomics and genetics in epilepsy and the treatment of rare epilepsies.  He is the director of the chromosome 15 dup clinic at Minnesota Epilepsy Group, P.A. and serves on the genomics committee at Children’s Hospitals and Clinics of Minnesota.