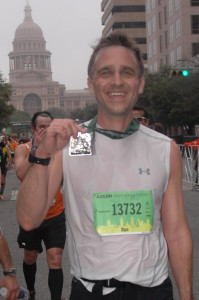 Dan’s personal epilepsy story was submitted to Living Well With Epilepsy to share his own experience.

Knee tendinitis, ankles that sprain easily … most marathon runners are nagged by a particular body part that is prone to injury. My nag is my head. I have epilepsy that, for whatever reason, tends to be provoked by running. I’ll be in the middle of a run, cruising along, feeling great, and – bam! – suddenly have a seizure. Bummer when you’re trying to set a personal record.

The mechanical act of running probably isn’t the culprit, but some byproduct of it (electrolyte imbalance?) irritates my neurons. The seizure starts as a déjà vu sensation that lasts 5 seconds, and then my brain checks out entirely for 1-2 minutes. I can fool you during those 1-2 minutes because I look conscious and normal … until you try to talk to me. Then I stare blankly like a dog listening to a physics lecture.

It’s funny what you forget

Remarkably, I blew off these seizures for a decade, 2003-2013, before I realized how severe they were. I spent a decade thinking they were a minor nuisance at most.

I blew them off because I was only aware of the 5-second part. I thought these seizures caused me to space out for 5 seconds and nothing more. They seemed entirely different from seizures that I had as a child, when I had 200-300 complex partial seizures that caused me to lose consciousness completely.

But it turns out the only difference is what my brain remembers.

Last year, eyewitnesses gave a play-by-play description of my altered behavior during a seizure, and it became apparent that my seizures hadn’t changed since childhood except now I’m unaware of being unconscious. I witnessed this for myself when I was hospitalized last October, as hospital videos showed seizures that I thought lasted 5 seconds but actually lasted several minutes.

It’s a little creepy watching a video of yourself having a seizure that you don’t remember. Honestly, it took 3 months for the shock of it all to settle in. Prior to last year, I was aware of these 5-second seizures that occurred during runs, but I still viewed epilepsy as a thing of the past because I hadn’t had a “real” seizure (i.e., lost consciousness) since 1997, as far as I knew.

Then, after the shock had settled, I started training for my next marathon.

Running give me a sense of empowerment

I love running, and I’m surprised people think I would give it up because of epilepsy. Ironically, I’ve always joked that “your brain needs to be a little screwed up to run a marathon.” Marathons come with a lot of blood, sweat, and lost toenails, and to endure those you need a body of steel or a twisted mind. I have the latter because I’m a masochist who enjoys pushing my body to the edge.

I also run because I don’t want to let epilepsy interfere with activities that I love. Anyone with a chronic health condition can relate to that sentiment. Outsiders often think it’s crazy for someone with Condition X to engage in sports or other hobbies that are “too risky,” but it’s not crazy when it’s part of your day-to-day life. To me, seizures are no different from a tight hamstring; it’s a physical hurdle that might weaken my performance but doesn’t preclude my performance. Every athlete faces some hurdle, and epilepsy is simply the card that I drew.

There are slight risks when I go running, but if I calculate the risks versus benefits, it’s not even close. Running brings a great sense of empowerment. Completing a marathon makes me feel like I can accomplish anything. A few cranky neurons and a couple minutes of memory loss is a small price to pay for that feeling.

My 8th marathon will be on May 4, 2014, in Vancouver, Canada, where I also ran my 7th marathon in 2013. I ran last year’s marathon when I still thought epilepsy was in my past. I’m returning to run it again because Vancouver is a phenomenally beautiful city and to symbolize the fact that – as different as my life feels this time – the things that matter to me are still the same.

What are your thoughts on Dan’s experience? Leave a comment below.

Check out “SUDEP Risk Factors and My Wakeup Call”