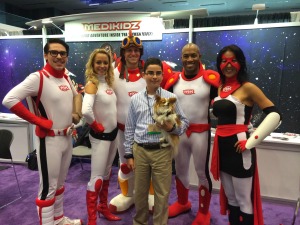 Joel and his mom took a few minutes to speak with Living Well With Epilepsy about his adventures, Flame, the comic book, and living with epilepsy.

JESSICA KEENAN SMITH: Joel, thank you for taking time to speak with Living Well With Epilepsy. It’s really important for kids to hear from someone their age who really is living well with epilepsy. How did you get involved with the Eisai/Medikidz Comic Book project?

JOEL WILCOX: I wanted to inform and educate people about epilepsy assistance dogs. I always thought it would be easier if you could just hand someone a comic book instead of trying to explain what epilepsy is to someone. I wish they had this book when I was first diagnosed.

I’ve shared my book with my friends and it’s pretty cool because I’ve never been able to explain what it feels like to have epilepsy and how Flame helps me manage my seizures. Now the other kids at school can understand what I go through every day.

SMITH: Do you mind giving us some background on when you were diagnosed and what type of seizures you have?

WILCOX: Sure, I have complex partial seizures. I also have grand mal seizures. At one point I was having a grand mal (tonic clonic) seizure every 30 minutes around the clock. That was really scary for my mom and dad. When it was really bad I would have 15 or so tonic clonic seizures trying to fall asleep at night. Oh yeah and I have atypical absence seizures.

SMITH: Wow, that sounds like a lot to handle. It sounds like you tried a bunch of different medications but not long ago you had a VNS implant. How has that been for you?

WILCOX: We did try a bunch of different medications and recently I had the VNS implanted. My mom says she feels like I’m back. When I was on the medicine I was not really myself.

I still have to be on some medication to control my seizures even with the VNS but I’m not so sleepy anymore. My mom says my personality came back.

SMITH: Let’s talk about the Flame. How did you find a tiny seizure assistance dog?

WILCOX: I wanted to get a seizure assistance dog but I was hoping for a small dog. Flame is a 5 lb papillon and she was perfect. She rides in my backpack to school and everything. Flame even helped me have the confidence to go back to school.

SMITH: Flame certainly does sound like a wonder dog! But how was she chosen for the Eisai/Medikidz comic book?

WILCOX: We found out about a Medikidz contest through 4 Paws for Ability. Medikidz was looking for a seizure assistance dog to feature in their next comic book. We submitted Flame and she was selected.

SMITH: You are in 8th Grade, I’m curious what do you want to be when you grow up?

WILCOX: I think I want to be a zoo keeper because I love animals. Koalas are my favorite but really I love any kind of animals.

SMITH: Joel, this has been fun. Thank you for taking time to speak with Living Well With Epilepsy. I’m looking forward to hearing more about your adventures with Flame.

“Search for the Next Medikidz Star” Contest

The “Search for the Next Epilepsy Star” contest, now open for entries, will identify a child living with epilepsy, who has overcome a challenge or obstacle. Children between the ages of 13 and 18 years old, who have been diagnosed with epilepsy by a health care professional, are encouraged to enter the contest at www.advancingepilepsycare.com. Entrants must register by December 31, 2014 and submit a short (up to two minute) video describing why he or she should be chosen to be the next Medikidz star.

As part of Eisai’s commitment to public education about epilepsy and helping to reduce stigma associated with the condition, Eisai has teamed up with Medikidz USA Inc. on the school age-appropriate comic book series. In addition to this year’s contest launch, Eisai is also announcing the availability of the second comic book in the series titled, Medikidz Explain Seizure Assistance Dogs.

“Raising awareness about epilepsy at a young age is more important than ever as stigma about the condition persists,” said James W. Wheless, MD, Professor and Chief of Pediatric Neurology, The University of Tennessee Health Science Center, Le Bonheur Children’s Hospital, Memphis, TN and a peer reviewer of the book.

The “Medikidz Explain Epilepsy” series is peer-reviewed by leading medical professionals. To order a free copy of Medikidz Explain Seizure Assistance Dogs and learn more about “The Search for the Next Medikidz Star,” visit www.advancingepilepsycare.com.