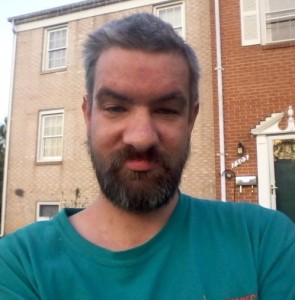 Michael Z.’s story may sound familiar to many of you. I know it did to me. He has experienced many of the same things I have, from being diagnosed in his late teens, to “busting himself up” during a seizure, to having trouble with side effects. Read his story and think of him this coming Friday as he heads to have an EEG.

My seizures first began in the late 1980’s – early 90’s, when I was in my late teens. I would get this buzzing feeling in my head and nearly pass out. I later learned that these sensations were auras that warned me a seizure was coming on, but didn’t think much of it at the time.

Then came the night of 8-19-1993 when I experienced a grand mal seizure while playing a video game at home. One minute I was alert and aware, next thing I knew I was on the floor convulsing with medics standing over me prepping me for the ambulance trip to the ER. I had injuries from the fall, as I busted my upper lip pretty good, but nothing much more than that.

In ’94 I had an EEG and hated it but no real conclusive results came of that. I also had an MRI in ’96 and it indicated dilated ventricles in the brain.  To this day I haven’t found any connection or info on how that effects/causes my epilepsy.

In 2007 I was also diagnosed with Asperger syndrome (a mild form of autism) so that may explain the dilated ventricles who knows?

I was recently hospitalized for pneumonia & my neurologist informed me that, after 20 years she wanted me off the Dilantin due to liver problems with the enzymes being too high. She put me on 500 mgs Keppra twice a day recently. Already the side effects are getting to me.

I have an EEG coming up on Friday, June 21st  as an outpatient procedure and truth be told I’m worried about breakthrough seizures already.