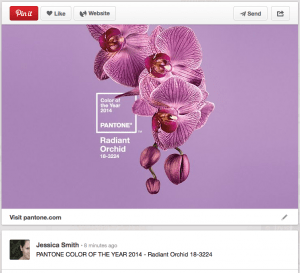 Each year, Pantone selects a color of the year. The company just announced the 2014 Color of the Year is PANTONE® 18-3224 Radiant Orchid. This beautiful purple hue presents a great opportunity for the epilepsy community. According to Leatrice Eiseman, executive director of the Pantone Color Institute®, “An invitation to innovation, Radiant Orchid encourages expanded creativity and originality, which is increasingly valued in today’s society.”

Radiant Orchid on the Runway

This fabulous color has already hit the runways in the Spring 2014 fashion shows. You will likely see the color everywhere from Target to Bergdorf’s. As a result, you will also spot the color at the award shows, and in glitterati photos. Therefore now is the time to maximize this exposure, and align the color with epilepsy awareness.

Past colors of the year

To give you a sense of the impact this color will have, this year and in the future, here is a list of recent colors of the year:

You could go out and buy something new in Radiant Orchid to raise epilepsy awareness, but there are other ways too. Here are a few suggestions:

There are tons of inexpensive and fun ways to to raise epilepsy awareness with the 2014 Pantone Color of the Year: Radiant Orchid. What are your ideas? Let us know.