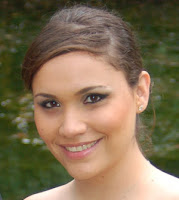 Eric Miller’s wife, Carolina, was 25 years old when she passed away in August 2011 as a result of SUDEP. Since her passing last summer, Eric has been working on The Candlelight Concert for Epilepsy, which will honor those that have been lost to SUDEP and those that continue the daily struggle with epilepsy.

The Concert
The Candlelight Concert for Epilepsy Awareness will be held on March 24, 2012 at The Patriots Theater in Trenton. The evening will feature a rare acoustic set by Dennis DeYoung of Styx, Marshall Crenshaw, Mary Fahl (of October Project), Dan Reed (of Dan Reed Network), Corey Glover (of Living Colour), Emily Grove, classical violinist and epilepsy advocate Martha Curtis and more. As well as being talented and celebrated artists, each performer holds a personal significance to Eric and Carolina’s life together. 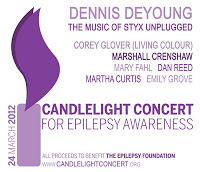 “Almost immediately after Carolina’s passing, I reached out the Epilepsy Foundation of New Jersey to begin work on this project. I thought it was a positive way to direct the tempest of emotions I was feeling and help me along in the grieving process.” explained Eric Miller.

SUDEP
SUDEP is Sudden and Unexpected Death in Epilepsy. The exact cause of SUDEP is not yet known. Epilepsy is often controlled through daily medication, still according to the Epilepsy Foundation, 1 out of 1,000 patients with epilepsy die unexpectedly each year. In those with uncontrolled epilepsy, the risk of SUDEP increases to 1 out of every 150 patients.

Tickets vary in price ranging from $45 to $180 and can be purchased at www.comcasttix.com. The $180 VIP ticket includes an autographed poster and exclusive meet & greet with the performers. For more information on the Candlelight Concert for Epilepsy Awareness or Carolina’s story, please visit www.candlelightconcert.org.

More info
More info can be found at www.CandlelightConcert.org. And you can read an interview with Eric, by the Epilepsy Blogger.

Similar to nutrition and religion, I am not necessarily a model to follow when it...

When it comes to nutrition and epilepsy, well, my comfort food is pizza. But now...

Jordan is 16 years old and a junior in high school and she's had epilepsy...

When a child with Epilepsy begins school, he or she may face many obstacles. In...

Jewel shares a few tips on how to keep track of your seizures. We hope...