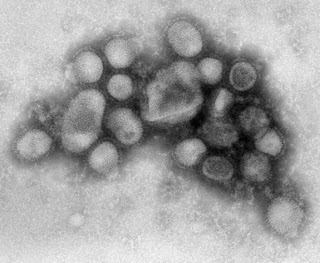 Image of the H1N1 influenza virus taken in the CDC Influenza Laboratory.

To give you a sense of how widespread this thing is, The American College Health Association recently reported that there were 7,001 total suspected cases of H1N1 on college campuses as of September 4.

That was when the kids had just arrived to school. We are only in September — flu season hasn’t even really begun yet.

I’d heard flurries that people with epilepsy be more attentive to what is happening with H1N1, but I didn’t think we were more at risk.

I lived in my happy bubble of denial until the CDC released a report, which exposed a common denominator in more than 2/3 of the children who died as a result of the H1N1 virus in the US. Approximately 67% had “chronic high-risk medical conditions such as epilepsy.”

I gotta say I was surprised. I checked and double checked. And that’s when I found that AES, CURE, Epilepsy Foundation, Epilepsy Therapy Project and FACES have joined together in support of public awareness on H1N1 virus risks in children with epilepsy, in response to the new CDC data.

This CDC report ran in their Morbidity and Mortality publication and emphasized how important it is for parents and guardians of children with chronic medical conditions to consult with their physicians about obtaining vaccinations against H1N1.

According to the CDC H1N1 FAQ site:
“CDC’s Advisory Committee on Immunization Practices (ACIP) has recommended that certain groups of the population receive the 2009 H1N1 vaccine when it first becomes available. These target groups include pregnant women, people who live with or care for children younger than 6 months of age, healthcare and emergency medical services personnel, persons between the ages of 6 months and 24 years old, and people ages of 25 through 64 years of age who are at higher risk for 2009 H1N1 because of chronic health disorders or compromised immune systems.

We do not expect that there will be a shortage of 2009 H1N1 vaccine, but availability and demand can be unpredictable. There is some possibility that initially the vaccine will be available in limited quantities. In this setting, the committee recommended that the following groups receive the vaccine before others: pregnant women, people who live with or care for children younger than 6 months of age, health care and emergency medical services personnel with direct patient contact, children 6 months through 4 years of age, and children 5 through 18 years of age who have chronic medical conditions.”

For additional information between H1N1 and Epilepsy you can visit any of the sites I have linked to above or you can follow the CDC tweets at: